Have finally managed to get some paint on the Walfisch. Oh for another 8 hours in the day. 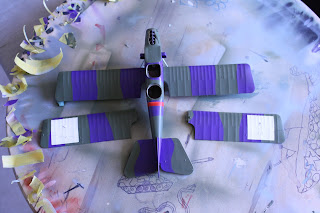 Build progress on Aeroscale   here
Posted by Unknown at 07:44 No comments:

And I mean small. Finally getting back on this after the holiday. Build thread at Aeroscale updated. 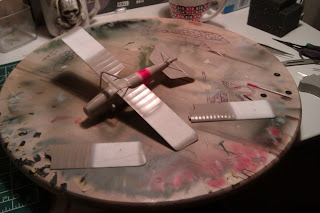 Have made a bit more progress on  the Walfisch. I am doing a build log on Aeroscale and it can be found here. 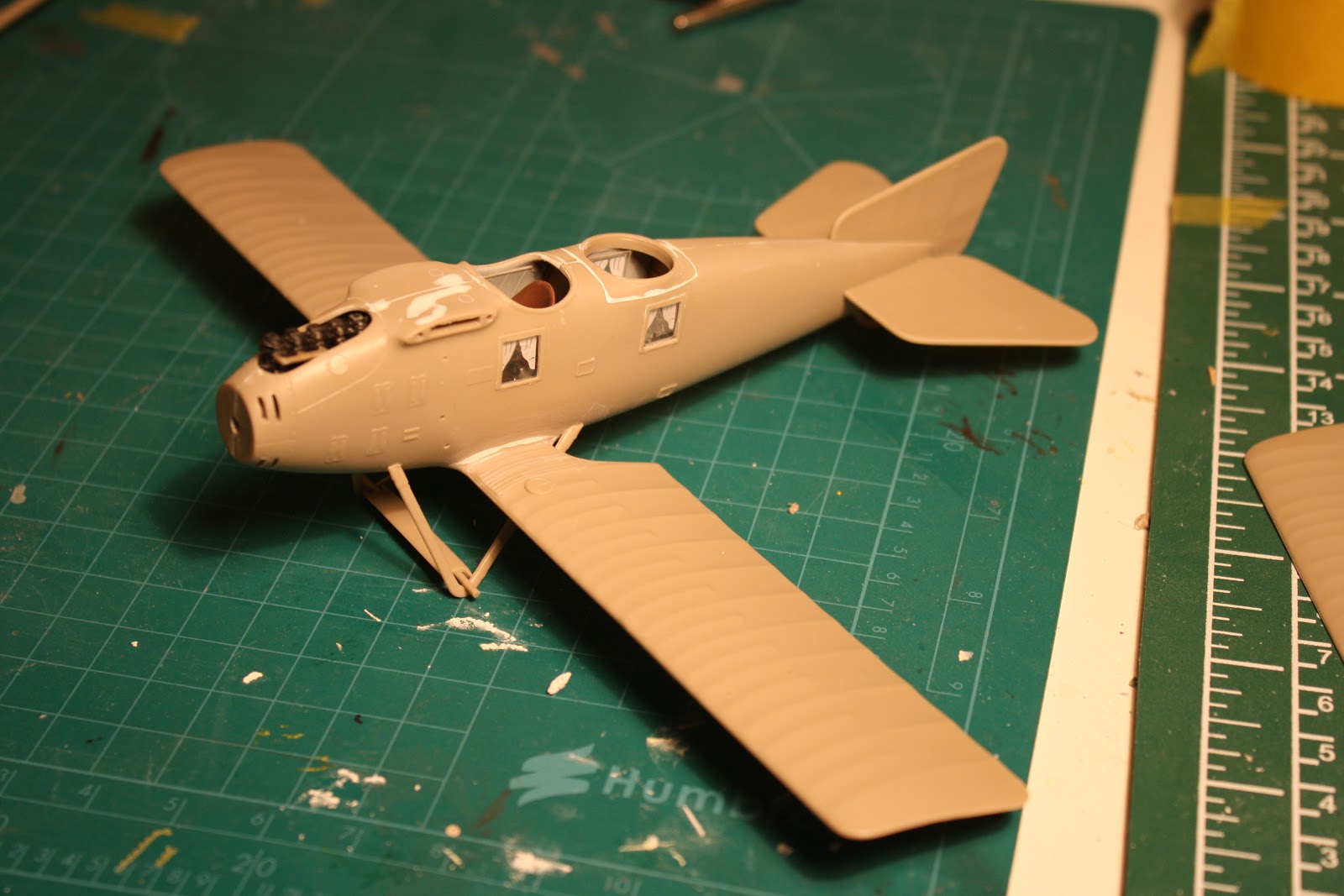 Been too busy with work and home to blog. Unsociable hours and the demands of two young sons have left little time for modelling let alone writing about it. A dose of the flu didn't help either. I haven't been totally idle though. I reviewed the Eduard 'Weekend Edition' Roland C.II for Aeroscale See here and have started a build review here. This is my first WW.1 build and I am thoroughly enjoying it. It is a chance for me to try out some new (for me) techniques like painting a natural wood finish. 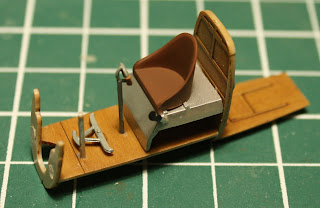 Consequently, the Typhoon build is on hold, but rest assured, I will be cracking on with it as soon as the Roland is done. I would just like to wish every one a merry Christmas (hope I haven't offended anyone by saying the word 'Christmas'. Ooops, said it again!) and may your stockings be stuffed with plastic (and I'm not talking prosthetic limbs here).

OK, so I have made a bit more progress on the typhoon. I am using a number of resin accesories from Ultracast to depict the famous 'Sharky', including their four blade prop and 'tempest' stabilisers. I totally overlooked the fact that I should have ordered their replacement radiator complete with dust filter and cuckoo clock doors. Not wanting to pay the postage on a single item (tight eh! Must be my Scottish ancestry), I decided to have a go at scratch building my own. I rolled a piece of miliput to form the body of the filter and finished it off with some plasticard. It's not perfect, but I'm quite proud of my first bit of scratching. 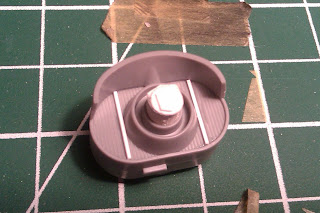 After a lick of paint and a wash, this is the result 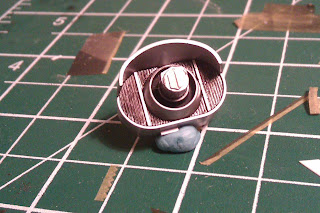 As I am opening up the gun bays I had to carry out some surgery to the upper wings and remove the panels. Using a pin vise, I drilled a sequence of holes just inside the perimiter of the bays. 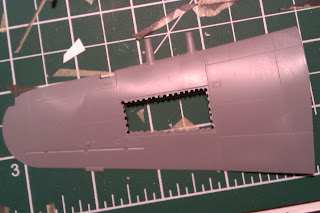 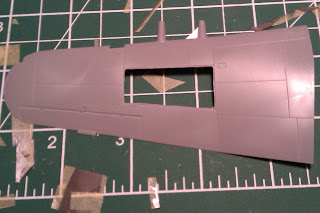 The resin pieces come with a substantial pour stub on the underside wich needs to be removed to get the wing halves together. I went to fire up my trusty 'Dremel-a-like' cheapo rotary tool and found it was dead, deceased etc, etc. I then attempted to saw off the offending article but soon realised that this onerous task would take up too much valuable modelling time. I decided to chuck a dremel sanding tool into my 18V De Walt drill and have at it, albeit, very carefully. Several nerve wracking minutes later, I was able to super glue the inserts to the top wings and get the wing halves together. With all the internal bits sorted, it was time to get the fuselage halves together and the wings on. The fuselage went together with the minimum of fettling but a dry fit of the wings revealed a gap at the wing roots. This, I fixed by inserting a sprue 'spreader' in the fuselage to force the root joint out a bit and this was augmented by a sliver of plasticard. Puttying and sanding of the seams and the mis-alligned panel lines came next, followed by re-scribing said panel lines. Now scribing is the modelling task I least relish as there is so much scope for making a mess of things, but there was nothing else for it so I broke out my scriber of choice from UMM. After marking out the line with a strip of Dymo tape, I carefully ran the tool down the edge..... and promptly ballsed it up. After much cursing and a dose of Mr. Surfacer, I made my second attempt. This time, totally focusing on the task and determined to exorcise my scribing demon, I managed a perfect pass. I think I have found a good method in using the excellent UMM tool, lightly scribing a first pass, removing the tape and then using the pointy end to slowly chase out the line to the required depth. It helps to be completely 'in the zone' while carrying out this task.
In removing the seam underneath the fuselage I had almost sanded away the tail stiffening plates so I replaced these with some cut from thin plasticard. 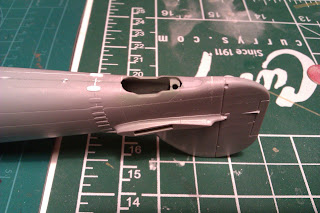 I also decide to replace the rail behind the canopy with a length of styrene strip. 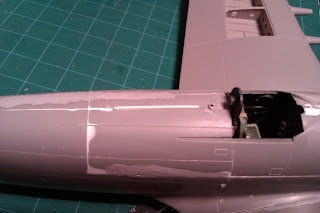 So, having attached the resin stabilisers, this is where I'm currently at. 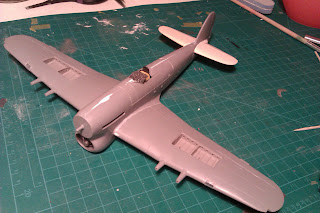 OK, so on with the modelling. After wrestling together the Revell 1/48 He 111, (see below) 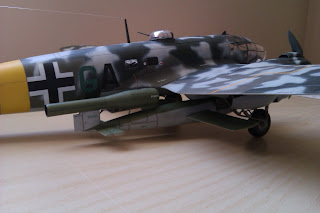 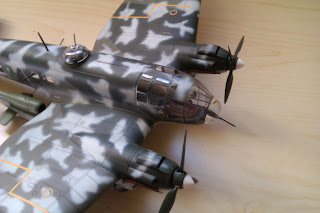 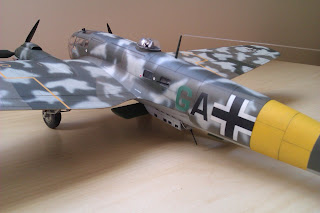 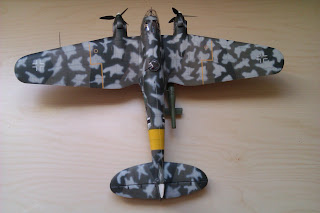 I decided I needed to build something fairly easy. As I had a Hasegawa 1/48 bubbletop Typhoon in the stash, along with a bunch of aftermarket goodies (Avieology sharkmouth decals, a slew of Ultracast resin), I figured this was the way to go. Just to complicate matters, I decided to add the Aries gunbays too. I began with the cockpit inserts that enable Hasegawa to use the same sprues for both car door and bubble top versions and soon realised that this was not going to be the easy build I thought it would be. I felt like I was back on the London Underground! Mind the gap!! 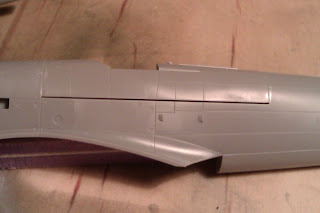 Getting the insert to fit resulted in the gap in the photo above and panel lines that didn't line up. The other side was slightly better. 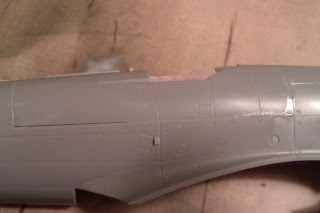 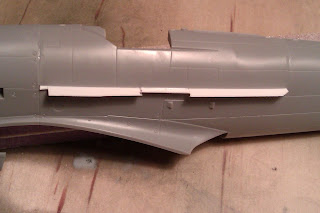 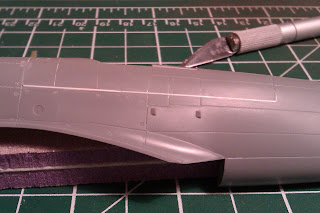 All seams to be filled at a later date. I then got to work on the interior. I opted to use the lovely Ultracast seat and proceeded to paint this up, nearly going blind squinting to get all the fab detail with my little paintbrush. It looks the biz when done though. 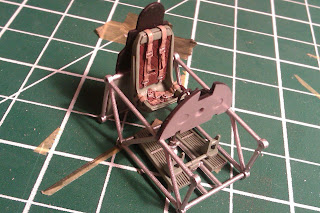 For added interest in the cockpit I have done the framing in alluminium and the side walls in a black / interior green split. I prefer this look to the standard all over interior green and this scheme was illustrated in the recent Airframe and Miniature book. For the instrument panel, I used Airscale RAF instrument decals. I must admit to approaching this task with some trepidation due to the small size of the decals. I was fully expecting to lose them and find them stuck to my face and other places, the next day. My fears were totally unfounded though, as they performed perfectly. I feel that the combination of this fantastic product, drybrushing and detail painting have produced a great little panel. I will definitely think twice about getting an Eduard panel for my next project (they are nice though). 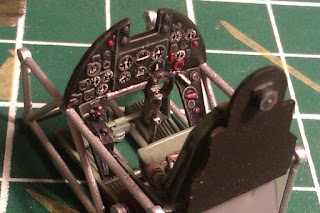 Anyway, with this build well on the road, that's all for now. More to come later.

A little bit about me.

Hi, Welcome to my blog. I have always been fascinated by aircraft. My father being in the Fleet Air Arm afforded me the opportunity to get up close and personal with the real thing. We would attend the annual 'Air Day' at my Dads base, HMS Daedalus, where you could sit in actual operational aircraft. I remember being instructed "not to touch that yellow and black striped handle between your legs son".

I am a 'born again' plastic modeller. I grew up with Airfix kits in the '60's and '70's and built anything I could get my hands on, usually aircraft, usually 1/72. My favourite movie of the era was 'The Battle of Britain' and I remember thinking I had died and gone to heaven when somebody presented me with the Airfix 1/24 scale Mk 1 Spitfire for a birthday. I was known to constantly (and most annoyingly I suspect) correct my Dads' colleagues, when they got their facts wrong about various aircraft. I moved up to 1/32 scale with the Revell series of WW2 planes.

Modelling came to an abrupt end when 'other interests' took over, namely: music, girls and beer (not necessarily in that order). I then spent many uproarious years trying to make it in the music biz, with some success I might add. My favourite album of this era was "Never Mind The B*ll*cks" by the Sex Pistols which gives you an indication of where I was at.

After settling down with a family, I would take my 2 boys to Duxford. Whilst there I would lurk around the plastic models in the shop. Finally, after many visits and much lurking, I bought a 1/48 Revell Spitfire Mk. IX and upon opening the box was transported instantly to that happy plastic place of my childhood. This led to two more Spitfires which I happily slapped together and brush painted, with no real worries about accuracy.

My 'Road to Damascus' moment came when I stumbled upon a certain website, namely Hyperscale and was gobsmacked at the quality of the models on display and by the number of after-market goodies you could buy. I thought to myself 'I can do this'. From that day I have been hooked. An airbrush was soon purchased and I have been working hard to perfect my skills ever since. I consider myself to be an average to good modeller but it doesn't come easy. I hope with this blog to document my average to good endeavours and hopefully entertain and inform along the way. Many thanks for looking.
Posted by Unknown at 15:23 No comments: